If you're like me, no doubt you're thinking ... here it comes again, the dreaded Holiday Season.

Sadie the Sadist is here to tell you how to make the most of all those pesky relatives and knock some check marks off your list.

There's a reason they're called BLOOD relatives, so re-frame your thinking: Instead of giving those annoying asshats gifts (spending your hard-earned money and waiting for no thanks), after reading this article, chance are you'll look forward to family gatherings.

Ideas from Sadie the Sadist
to Jumpstart

Aunt Betty: Maybe your aunt isn't named Betty, but we all know the type--not only is she opinionated, but she sticks her nose into everybody's business. Basically, Betty is a gossip and a snoop.

The perfect gift for Betty ... (Hint: big mouths have lots of teeth) You got it, Ivory. Sure, elephants are an endangered species, and anyone who takes their tusks deserves to be drawn and quartered or thrown into a vat of boiling oil, but Aunt Betties abound, providing a prolific and cheap source of ivory.

Note: If you use violence to knock out Aunt Betty, stay clear of her head; you don't want to damage the merchandise. I recommend using the method Oral surgeons use for impacted Wisdom teeth: knock her out with drugs before extraction.

While you're inside the old broad's pie hole (cock pocket, gob, skull cave) yank out her tongue. (Correctly prepared, tongue is tender and tasty.)

Cousin Dick: Maybe you don't see Dick very often, but when you do he leaves a big impression. If Dick doesn't have you cornered in the kitchen, he's down the hall patrolling the bathroom, or even worse, playing hide-and-seek with the kiddos. Dick is never gonna change, but he makes a handy-dandy purse for all his cash.

Sister Selfie: Plain annoying. Sister Selfie can't be parted from her phone, and the camera's glued to her duck face, capturing every moment of her useless existence. The world will thank you for saving us from endless Facebook posts when you kill her.

Halloweenies: A Recipe from Sadie the Sadist

I've been away ... internet access wasn't available. But they let me out for good behavior, just in time for my favorite holiday!

1 head (Wimps can use styrofoam, but that crap destroys the environment; I prefer a natural, biodegradable skull)

Two strips of ham (or your favorite lunch meat) for lips

Lots of teeny weenies (enough to cover the head) Store bought or the real thing ... you know which I prefer!

Lots of toothpicks: round, not those flimsy flat things. Note: if you're using a real skull, nails work better--double pointed metal barbs are best, but difficult to find (see note below)

2) Prepare your weenies. Boiling makes them plump and fat, but roasting produces a lovely color and intensifies the flavor.

3) If you're using toothpicks, spray them silver. Skip this step if you're using nails, but make sure they're stainless steel, rather than nasty aluminum which causes cancer ... depending on whom you're serving, of course.

4) Secure the weenies to the head, taking care to place them in neat lines. Don't forget to leave room for the eyes and lips. Note If you're using metal barbs, you'll probably stab yourself several times ... not to worry! Blood lends dimension to your creation

5) Stick in the maraschino cherry eyes, unless you have something more authentic handy

6) Fold ham to create and lips and secure with broken toothpicks, so they're hidden. Note: I've tried using real lips, but they're sloppy 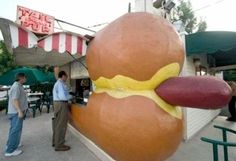 Hungry for travel? Me too!

Half the planet is heading into summer, and the other half is looking to escape from winter, so now's the perfect time to travel. Get away from work and the daily grind, pack the kids and Grams into the car and take off on the open road ... plus travel offers other advantages you may not have considered.

Anyone with a wad of cash can plan a vacation to Disneyworld--although the Mouse House offers an awesome selection of tender victims and rides present convenient opportunities for getting rid of that pesky family, security is tight and Disney is high profile, so when little Johnny takes a tumble from Space Mountain, you'll be faced with a nasty backlash of publicity, not to mention a barrage of questions from the police.


Why not consider a less populated destination? For example: the Mojave Desert, Central Park at night, anywhere in North Dakota.

Don't waste space packing lots of clothes. You won't need them! Instead, make sure your suitcase contains these useful items: duct tape, meat cleaver, Pentobarbital (drug of choice for US executions). Optional: a gun. If you're out in the desert, coyotes will clean up for you, otherwise you may want a plastic tarp. Note: Tupperware is always handy, and I always pack a large cooler with lots of ice.

Tempting as it may be to stick around and enjoy the aftermath of your little escapade, I advise you to leave the scene as quickly as possible. Thanks to the internet, you can keep tabs on all the action. Now's your chance to get away and enjoy a real vaca!

Posted by Unknown at 7:53 AM No comments:

Robot news: from Sadie the Sadist

The History of V.D. by Sadie the Sadist

For most of us, romance leads to torture. So it’s no wonder that Valentine’s Day was named for a Christian martyr.

Back in 269 A. D. a priest named Valentine lived in Rome, and at that time (unless you were a masochist) Rome was not a great place to be Catholic.

Anyway, priest Valentine ignored the emperor’s mandate about soldiers hooking up and secretly performed marriages. That really pissed off Emperor Claudius, so he ordered Valentine to be whacked. The priest was beaten, stoned, and finally decapitated. Those Romans knew entertainment, not to mention partying. They already had a mid-February fertility celebration called Lupercalia—an excuse for three days of running around naked, raucous sex, and overeating—so, years later when the Catholics took over Rome, fans of Valentine tacked his name onto that holiday.

Don’t mope around waiting for some loser to give you a box of chocolates and flowers, take a tip from ancient Romans—go down to your local bar, whip it out, create a scene. V.D. means it's time to party! And remember, nothing raises the libido like severed body parts.

Posted by Unknown at 8:16 AM No comments:

Stop staring at the mirror reflecting on the changes you intend to make to become a better, happier, more socially acceptable you.

Too fat.
Too lazy.
Spend too much money.

All that crap your parents, friends, and your annoying boyfriend/girlfriend (note to self: dump his/her ass) are always pointing out.

Sadie Says: quit wasting your time with all that b.s. soul searching. Feeling guilt and shame, making resolutions that you know you'll break, only make you feel lousier. Right? 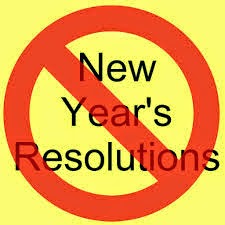 The key to happiness is going with the flow. Follow Sadie's example, and make a list of vows that you can keep!

1. Bigger is better, so stuff yourself with Cheetos, pizza, and fried food.

2. Make a list of irritating people and invite them over for dinner. (Note: first make room in the freezer.) Then feast on steak till 2016.

3. Overspending is not a problem when you use other
people's credit cards.

4. It's easy to cut down on drinking. Switch to weed.

5. Help a nicotine addict by filling their cigarettes with gunpowder.

7. Why look for another job? Just kill your boss. This will create an opening, and you'll be ready to jump in.

8. Instead of vowing to spend less time on social media, make it your business and take on multiple identities. Becoming a sock puppet allows you to scam people and leave bogus reviews.

9. Joining a gym really pays off when you case members in the locker room and follow them out into the parking lot. Working out at night is best.

10. Accept yourself just as you are. Attempting to change is a waste of time and energy, unless you score a prescription for Xanax or other fun drugs. 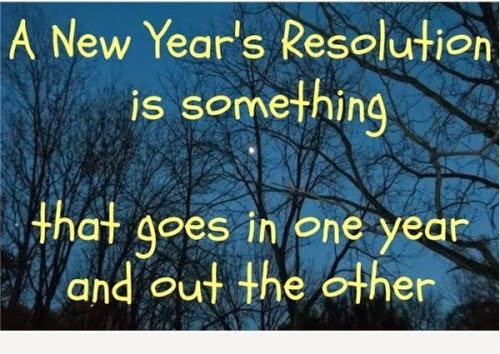 Posted by Unknown at 8:34 AM No comments: