Get Ready to be Dumped

Sadie the Sadist knows all about competing with robots and automated systems in the workplace ...

Sadie's advice: transform before you lose your job!

Check out this article from The Washington Post:
The Brave New World of Robots and Lost Jobs

And this story on MSNBC:
How Robots Will Impact Jobs in the Near Future


Normally, Sadie advises killing pesky coworkers, but these come with a warranty and they're replaceable (like you) ... You're best course of action is to upload your brain into a robot body. Ultimately, Sadie intends to become a robot cat.

Robots on the Rise!

These days, whether you realize it or not, most people work with robots. Make no mistake about it, your boss is comparing your performance to your potential robot replacement ... and, chances are, you lose!


In fact, you may be expected to train your replacement. Rethink Robotics has recently unleashed Baxter a trainable robot. Baxter is affordable (just $25,000 plus warranty) and he can perform tasks at twice the speed of you or me.

(Personally, I can't wait to get a Baxter Robot Butler.)


As wages rise, you can bet employers are thinking about how fast they can replace you with Baxter or Baxterette. According to a recent study at Oxford University, here's a list of jobs you can kiss good-bye:

Read more in the article, The Shift from Low-Wage Worker to Robot Worker.

Have you heard about the restaurant in China that's operated by robots? Watch this video (oh, yeah, it's in Chinese):

Even if you manage to keep your job, don't imagine you're home free. The New York Times just ran an article about killer robots in the workplace. Read As Robotics Advances, Worries of Killer Robots Rise. Over the past 30 years, robots have been responsible for 33 human deaths. That is bound to increase as we bring more robots into the workplace and give those robots more freedom to roam.

I just wonder, with so many people's jobs being replaced by robots, who's going to have money to buy the stuff these robots make? 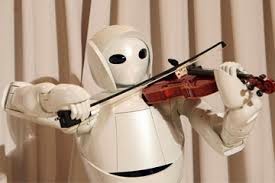 According to an article in Forensic Magazine this Saturday close to 8,000 vacuum-sealed pouches holding the remains of 9/11 victims will be moved to the new World Trade Center site to be kept in a repository 70 feet under ground.

The hope is that the tiny shards of bone and advances in forensics will allow scientists to determine the identity of victims. 1,115 victims, 41% of the dead, have not yet been identified through DNA matching, but the work continues. Read more at Forensic Magazine.

The new September 11 Memorial Museum open on May 21.

Thanks to all the developments in DNA and other forensic detection methods the number of cold cases should be dropping, right?

According to a March 6, 2014 article in National Geographic Daily News, most cold cases are solved when new witnesses step forward.

According to the article, the number of unsolved murders is on the rise:

The rise in cold cases is largely attributed to gang killings and a lack of witnesses willing to step forward.

Solving real life cases has little in a common with what you see on TV programs like CSI.

For a long time, dogs have played an important role in detection. This article offers insights from recent research and explains how these amazing canines sniff out bombs and other explosives--including Composition C-4, a plastic explosive used by the U.S. military.

Apparently, trainers have been using products that mimic the scent of Composition C-4 for training, but research has determined that the dogs sense the difference between real explosives and the substitutes. Read more here in the Science Daily article, published February 27, 2014.